Players have known several Roulette strategies that increase the odds of winning.


Despite the French semantics of the term, rumor has it that it came from England.

A legend from the 19th century

How can you say that Roulette is based on teamwork? Simply: hire 6 men to register the winning numbers in a Monte Carlo casino and make roulette history. The plan worked out well in 1873, when Roulette player Joseph Jagger won $400.000. It was no miracle, just a simple research conducted on the frequent numbers that popped up during the games. All the rest is pure luck. 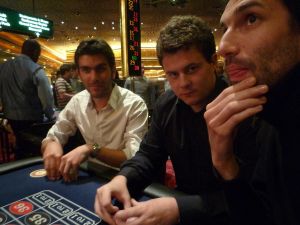 They say that the 'criminals return to the crime scene'. Charles Wells was no criminal, but knew that returning to the same Casino will bring him luck. Could you believe that he won 2 million francs in just 2 days? For this performance, he was later known as the <Man who Broke Bank at Monte Carlo>. On top of everything, Fred Gilbert wrote a song that immortalized this magnificent gambler. The name of the song: The Man who broke the bank at Monte Carlo.

Another die-hard fan of roulette games sold everything and arrived to Las Vegas Plaza Hotel with $135.300. He placed a bet on red 7 and won, all this being broadcasted by the British Sky One channel. It was a 'double or nothing' spin. This stunt enabled Ashley Revell to double his fortune. It is bets like the one of this Londoner, that provoke fewer among average players. If only they knew that Revell promised to never do it again!

Pushing the limits with technology

Knowing that computers were built by men, gave roulette players the false idea that they can trick the house with the help of software. The best example is set by Claude Shannon and Edward Thorp. The two MIT students created (1955) a device in order to predict the odds. There is no record about how much they won or lost. Fact is that they made roulette history.

Another group of students, this time from the University of California Santa Cruz became famous for their ingenuity, after creating a computer that increased their odds. The Eudaemons (as they called themselves) managed to win $10.000, but their days of glory were ended after a short circuit on the device.

A contemporary attempt of predicting frequent numbers is linked to the name of Gonzalo Garcia-Pedayo. The Casino de Madrid was a sure target for several years, during which he won over $1,000.000. He was unmasked but the court had merci upon him.

These are just few of the many famous roulette players who managed to engrave their names in roulette history.

All necessary Roulette Info is possible to find here. Do not be shy and afraid - just try one of the world's favorite roulette games. Usuful tips and strategies will help you to succeed when playing roulette in both online and land casinos!

More interesting and really useful facts about various roulette systems: how to use them and win every bet. Learn to manage your roulette bankroll wisely and place the bets that will definitely win with each spin. Rare betting strategies for roulette explained.

Anyway, do not forget that roulette game is the game of luck: systems do not work if you do not believe in them.